What Are The Best Irons For Beginners? The Latest Edition

Every professional golfer was once a beginner, right? That’s pretty obvious I know. But sometimes we tend to forget the obvious and need to be reminded about it from time to time. As a beginner, now you may be wondering how the best irons for beginners will help you practice and play better, am I correct?

* Below, you’ll find out more detailed reviews, but you can also click the links above to see current prices and customer reviews on Amazon.com

In fact, some beginners are not even aware of this fact. They simply buy the best irons only because they complete the golf set.

While it’s true that there isn’t a single golf club in the whole world that has the ability to fix your swing. But that doesn’t mean you can’t improve the level of your game. Because once you get better at how you play, your swing will inevitably fall into place on its own. 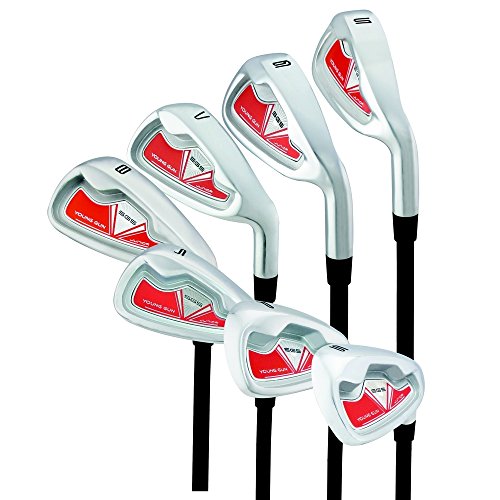 And one of the most effective ways to encourage improvement in golf is buying the best golf clubs﻿﻿﻿ for beginners that have the capacity to do a lot more than you’d expect.

As far as the best irons for golfers, especially beginners are concerned, they might not assist you with your swing but they have their own other unique advantages. The best irons undoubtedly allow beginners to progress faster, strike comparatively stronger shots, and most importantly, bring fun and “play” back into the game.

An Introduction to Golf Irons

Before you choose the best golf irons for beginners, let’s understand first what is a golf iron. Golf irons are called as such because the club heads are made of metal. The iron club heads are thin from front to back while the club faces are grooved to produce spin on the golf ball. Experienced players commonly choose a blade style iron, while newbies/beginners and many recreational players will often opt for a cavity back style iron. One the most common iron used in recreational golf (mini golf-course, park golf courses) are golf putters.

Blade-style irons have a fullback on the rear of the clubhead, while a cavity back is hollowed out to a certain degree. This creates an effect called the “perimeter weighting,” which is an advantage for newbies or beginner players. Beginners should always go for game improvement irons or super game improvement irons because they provide the most benefit to recreational golfers or non-pro players.

A standard off-the-shelf iron golf club set includes a 3-iron through pitching wedge that totals to 8 clubs. The clubs are identified by a number 3, 4, 5, 6,7,8, and 9 marked on the sole of each club, except for the pitching wedge which is denoted by “P” or “PW.”

New to golf shops are golf club sets called blended sets. These sets replace the traditional long irons with hybrid clubs. The set is filled out with cavity back mid- and short irons.

And as you go through the set to the shorter, more lofted irons, the resulting shots will result to a steeper trajectory. The golf balls will rise and fall at a steeper angle.

When Do You Use an Iron?

Irons are used when you approach the green or playing out of trouble (sandbars, or rock gardens)

Irons are your clubs-of-choice when you are less than 175 yards from the flag.  As mentioned, the most common irons are marked 3, 4, 5, 6, 7, 8 and 9. A general rule among golfers is that there should be a ten-yard gap between each iron. Let’s say, a ball hit with a 6 iron will get a distance of 10 yards further than a ball hit with a 7 iron. So logically, the closer you are to the green, the higher the iron you should use.

Irons can be played from the teeing ground, using a golf tee,  But most of the iron shots come in handy in the fairway. Irons are designed with a leading edge that is somewhat sharply rounded to conquer divots.

What you should know before reading on?

​Finding the Center of the Clubface

So keeping this mind, you should know that golf club manufacturers design clubs, especially irons for 3 different types of golfers. The first are the professionals and skilled golfers, the second are the average golfers, and the third are amateur and beginner golfers.

The last can also be golfers with a high handicap. Because both beginners and high handicap golfers want to achieve longer and straighter shots despite missing the center of the clubface.

Strike Down On Your Iron Shots

What features to look for in the best set of irons for beginners?

Two very important characteristics that beginners should scrutinize in the best irons are the club head design and shaft. 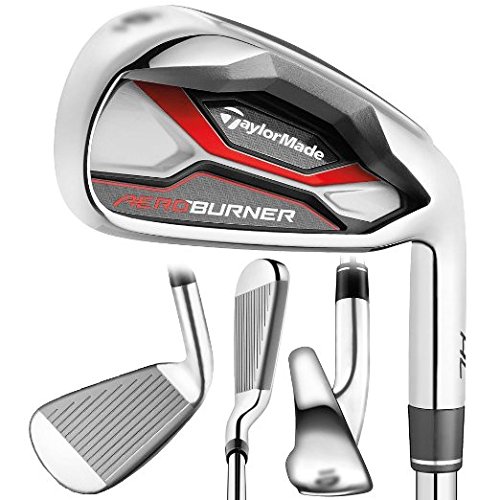 Clubs that are built with a comparatively larger clubface and are heavier around the club’s sole instead in the middle are known as irons with a cavity back.

Golf irons with such a club head contribute in increasing the speed of your newly acquired swing. And since you don’t have the professional skills to be precise when it comes to hitting in the middle, a larger clubface will help you go a long way, literally.

Beginners should give the shaft of clubs their due importance. Otherwise, their performance will get compromised. There are 2 types of shafts; steel shafts and graphite shafts. And both types of shafts are built with different levels of flex. So choosing the right kind of shaft flex has the ability to improve precision and distance.

As a beginner, if you have an extremely slow swing speed, then opt for shafts that are more flexible. And if you have a normal or remarkable swing speed, then a stiff shaft might be the best choice for you. Swing speed can be easily measured at any golf shop, so don’t stress about getting this done first in order to figure out what type of shaft will be suitable for you.

Other important tips for buying the best irons for beginners

Apart from the club head design and shaft, there are some other pointers that every beginner should keep in mind if he or she wants to get off to a great start. There are some qualities that your set of irons should have, no matter what, if you want to get better at the game eventually.

What to Wear Golfing: A Helpful Guide for Beginners

The Best Golf Grip Tape To Re-Grip Your Clubs

The Best Golf Training Aids to Help with Your Swing